check availability
See on the map
Add to Favourites
Santu Lussurgiu | Sardinia | Hungry Culture | Gourmet | Slow & Chic
Useful Info
Charming's opinion
Located in the medieval village of Santu Lussurgiu, Antica Dimora del Gruccione is the ideal place for those who want to start a tour of the island and savour the tastes of the traditional cuisine, based on products considered "principals" by Slow
Food.
Check In: 02-02-2023 Check Out: 03-02-2023 Nights 1 Clients: 0 Adults Modify
Opening Period : Antica Dimora del Gruccione
Open all year round

Location
The Antica Dimora del Gruccione is located in Santu Lussurgiu, a village of medieval origin. A place full of history, culture, folklore and artwork. At a altitude of 503 meters, it is situated inside the biggest extinct volcano of Sardinia, in a Natural Reserve called Sinis-Montiferru, which is also very close to Sardinia’s enchanting coast. Protected by Mediterranean oak forests, always cool in the summer and rich of many springs, the mountain of Montiferru allows a breathtaking view from the rough cliffs of the coast of Bosa to the dunes of the peninsula of Sinis near Oristano, as well as to the Gennargentu mountains. The area is particularly rich in archaeological treasures from the past: starting with the proto-sardinian time (“domus de Janas,” “dolmen,” “tombe dei giganti,” holy wells,” and “nuraghi”), the Phoenician-Punic period and the Roman time. There are noteworthy examples of religious architecture from the early-Christian periods as well as Pisan-Romanesque examples and the Renaissance period. Its position in the central-west area of Sardinia is ideal for day excursions to anywhere on the entire island, from coastal zones and plains to mountain regions.

Hotel
The Antica Dimora del Gruccione is an “albergo diffuso,” consisting of a main mansion and several other buildings in the neighbourhood.

Restaurant
The chef only uses the highest quality products from the Montiferru area, including a selection of the best regional products (those labeled DOP/DOCG), and also varies the menu on a daily basis. On demand, a vegetarian menu can be arranged, which is otherwise hard to find anywhere else on the island. The main touch is a traditional Sardinian cuisine, based on the Slow Food concept. Slow Food, dedicated to the preservation of cooking with high-class local products, was originally an Italian non-profit-society, and is now world-wide. The hotel uses items labelled as  “presidi” according to the standards of Slow Food, such as the cow-cheese “Casizolu” and the meat of the “Bue Rosso” (beef cattle). Montiferru is one of the places named “degustazione” for this new breed of beef. You will also taste other excellent products of the region, such as the Pecorino cheese of Osilo, the Fiore sardo cheese of Gavoi, the extra vergine oil of Seneghe, the Pompia, a special fruit of Siniscola, the rosemary honey of Sennariolo among the others.

Nature
Trekking for all levels of expertise and guided excursions on the mountains and to the sea in the Sinis-Montiferru National Park and to other areas of Sardinia. Horseback riding, fishing tourism, diving, centre of H.S.A., patents of PADI, ACUC, CMAS, kayaking, sea-watching and excursions along the coast in small boats. Guided nature tours and bird-watching with experienced guides/tutors.

Culture
Guided archaeological and anthropological tours with experts. Guided tours to museums, including the  “Museo della Tecnologia Contadina” (Farming Technology Museum) in Santu Lussurgiuand others in the area.

Tradition & Handicraft – Exquisite tradition of “enogastronomia” (gastronomy and wine) based on the absolute purity of the products of the local farmers and shepherds. This is a special production area of the cow-milk cheese “Casizolu”, and the meat of the “Bue Rosso” (recommended by Slow Food) and of other outstanding products (extravergine olive oil, rosemary honey, vernaccia and malvasia wine). Unique equestrian handy-crafts, wood carvings, cast iron art, and knives. 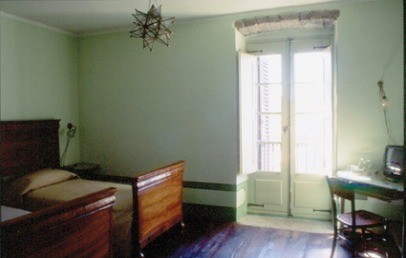 Single bed Cosy and attractive single room, furnished with a mix of vintage and modernism. It is read more »»
check availability
x

Single bed
Cosy and attractive single room, furnished with a mix of vintage and modernism. It is characterized by "exposed stone" technique, antique bricks, vaulted ceiling and wrought iron. The private bathroom has a shower or a bathtub.
Tweet
Pin It 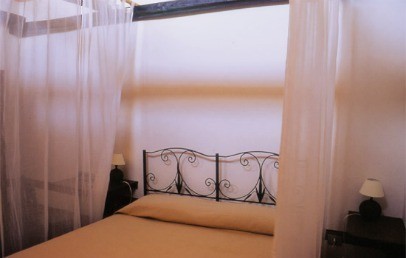 Double bed Cosy and attractive double room, furnished with a mix of vintage and modernism. It is read more »»
check availability
x

Double bed
Cosy and attractive double room, furnished with a mix of vintage and modernism. It is characterized by "exposed stone" technique, antique bricks, vaulted ceiling and wrought iron. The private bathroom has a shower or a bathtub.
Tweet
Pin It