Sardinia is the Italian region with the highest coastal development and guess which aspect it is best known for all around the world?
Exactly, for its beaches!

CharmingItaly usually backs on to this same topic because, first of all summer is coming and second of all, several tourists and Sardinian lovers still ask us “which are the best beaches in Sardinia?”
Keep in mind that the island is not a “tiny isle”, but it boasts kilometers of seacoast. As a matter of fact, it has thousands of beaches and bays and it is quite difficult to say which ones are the best beaches in Sardinia.

There is not a complete scale for evaluating how beautiful a beach is and the top-5-lists with the best ones usually are reducing. Each beach has its own particular characteristic, all Sardinian people has their favorite ones and, as we have asserted many  times, every beach in Sardinia may be “the best” related to a single aspect: the best wild bay, the best family beach, the best spot for surf lovers, and so on and so forth.

That's why we have decided to:

- enlarge our list of Sardinian beaches
- divide them by geographical area
- underline their features with a useful map legend
- and enclose the best 50 in this handy infographic on our sister site charmingsardinia.com

Share it and bring it with you to your holiday in Sardinia! 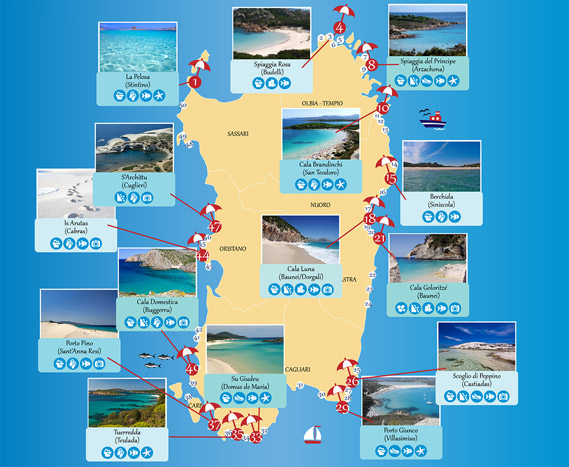 Discover more about Sardinia and download the Free Travel Guide!