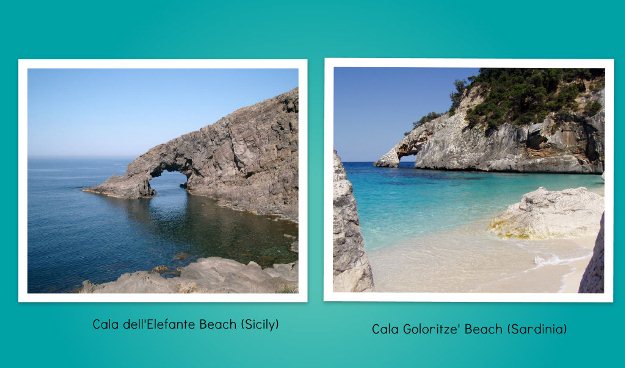 Every aspect of what Sardinia and Sicily are, is in fact related to the sea and to the perfect idyll of the many different cultures that have left their mark on the Islands from age to age.
Obviously, for lots of people, they are symbolized by sun and sea, but each of them have also thousands of different and interesting faces.
As in each Italian region, the two Islands offer different cultural sites to visit , traditional recipes to taste and a strong identity that is a pity not to discover (and to confuse!).


Where they are located?
Are you sure to know where is Sardinia? and Sicily?
Are you wondering: are they part of Italy?

Geographically speaking, Sardinia is the second largest island in the Mediterranean Sea, also considered (for its shape) the footprint of the “boat”. The nearest land masses is the island of Corsica while the 355 Km is the flight distance between Sardinia and Rome.
Geographically speaking, Sicily is set in the Mediterranean, surrounded by sea. It is a triangular-shaped island to the west of Calabria, the toe of Italy's 'boot'. To reach Sicily there is a 20-minute ferry ride across the Strait of Messina from the Italian mainland.

Nevertheless, in the literal and “social identity” senses of the question, both Sardinia and Sicily are two islands separate from the Italian mainland and, if you ask people here what their nationality is, though, you are just as likely to hear “Sardinian” and "Sicilian" as 'Italian'.

"Sardinia vs. Sicily" is not a real competition.
The purpose of this post is to highlight the features that make them unique and intrigue you about their main common point: the beaches.
In order to help you in finding your favorite beach... stay tuned and do not miss our next infographics about the best Sardinian and Sicilian beaches!