Life is a theatre. Everybody dress up! 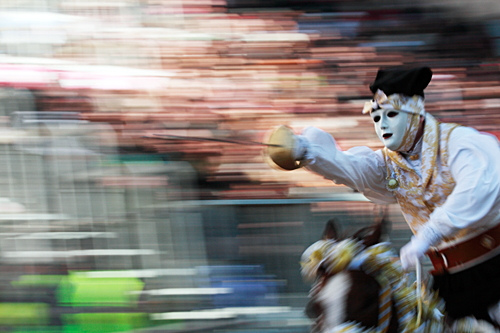 This is the slogan of the Venetian Carnival 2012, the most famous Italian Carnival, but there are a few others that it would be a pity not to see once in a lifetime!

1) Venice Carnival: Pantalone and masks in general have always been a central feature of the Venetian Carnival. They are surely best known for their appeal and mystery that still exercise since 900 years.

2) Viareggio Carnival: Each year Carnerval in Tuscany is especially held in Viareggio. Its masked parades is characterized by allegorical floats in papermache...starring Burlamacco!

3) Putignano Carnival: It is the most famous Carnival in Puglia and the oldest celebration in Italy. For the past 617 years, a whole season of  masquerades and fun thakes place for people of all ages. The main Putignano Carnival mask is Farinella!

4) Sa Sartiglia Carnival: It is well-known along Sardinia and famous for its equestrian carousel. Dating back to XVI century, it occurs in Oristano Province and the guest star is Su Componidori.

5) Ivrea Carnival: Around the year, Ivrea is a quite city closer to Turin in Piemonte. But, during Carnival the whole Ivrea spends its loud day during a juicy orange battle which is an allegoric representation of 1994 local insurrection.

Next post: Carnival traditions in Venice. Discover about Italy!