How many different ways to celebrate it? 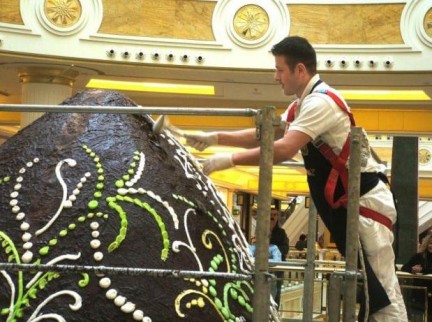 As every Christian festivity, Easter (Pasqua) plays a central role in Italy: it is the second most important festivity after Christmas.

If you want to understand the reason, just remember two aspects:

1)    The historical and cultural importance of the Catholic church in Italy
2)    The religious meaning: while Christmas is Jesus’ birth, Easter is his passion, death and resurrection.

So, during the holy week throughout Italy, people celebrate Easter with rituals, processions, and… with more then 3.000 passion plays on Good Friday! On Easter Sunday, after the long Lent period, people celebrate the resurrection. The day after, on Easter Monday (called Pasquetta – the little Easter) is generally dedicated to outdoor trips or picnics, with friends or the family.

This is why I warmly suggest you to visit Italy during Easter. I warn you: you have to consider the crowds as the whole country is on holiday, and also high season prices. But you will have the chance to discover the ancient Italian Easter traditions, perhaps less popular than the art monuments or then the beaches, but certainly very appealing. It’s definitely worth to do this experience.

Once you’ve decided to follow my suggestion, the logic consequent question is: where exactly?

I will reveal you a secret: even if, from 1861, Italy unified the territories and became a Nation.... Italians are still not aware of it!

In fact, they continue to maintain regional traditions and dialects as a sort of treasure, proud and jealous of their uniqueness. Even if the religious leading thread exists, every region, every city, every small town celebrates in its own way. (Just one thing is everywhere in Italian Easter: a rich family lunch!)

In Florence, for example, is very popular the “Scoppio del carro” celebration (Explosion of the cart), which dates back about 300 years ago. A huge decorated cart (built in 1679, with some fireworks attached) is dragged through Florence by white oxen decorated in garlands, until it reaches the Duomo (Cathedral). 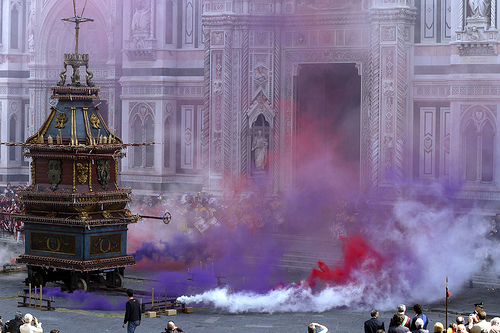 Here the fireworks are lit, according to an involving traditional rite.

In Sardinia, we recall the traditional Eastern celebration of Oliena (Nuoro), where, on Eastern Sunday, people celebrate S’Incontru (the meet). Two processions (the participants are dressed with typical costumes), the one carrying a statue of the Virgin Mary and the second carrying a statue of Jesus Christ, meet after a long walk through the village’s streets. The curious thing is that, people who don’t participate to the processions are in their balconies and celebrate by shooting in the air, announcing the resurrection.

Always in Sardinia, very fascinating Eastern rituals are celebrated in Alghero. Starting one week before Eastern, a series of traditional rituals and processions take place, among Catalan songs and evocative ceremonies. 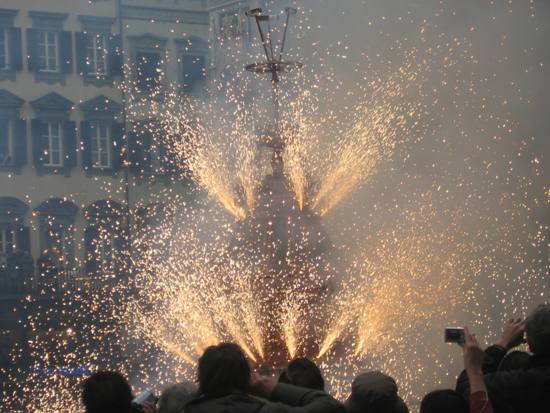 Another interesting Easter celebration take place in Sulmona (Abruzzo); it is known as La Madonna che corre in piazza (the Virgin Mary who races through the square) and encloses very strong religious meanings and dramatic shades, also thanks to the personification of the Virgin Mary. She can’t believe in his son resurrection, so first she goes slowly out of the church, but than she catches sight of her son and start running, joyful, to reach him. 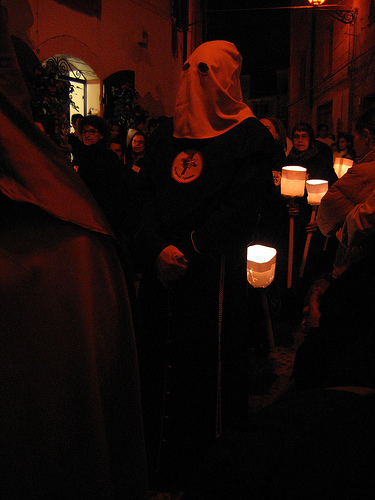 Other remarkable rituals take place in Sicily, in particular in Trapani (the longest Italian religious festival and one of the most ancient) and Enna (which rituals date back to the Spanish domination).

A special mention has to be given to the Easter festivals of Procida (dating back to XVI century, one of the most evocative) and Ischia (to be celebrated in the open air, in the squares of the ancient districts, tasting the traditional Mediterranean cuisine). 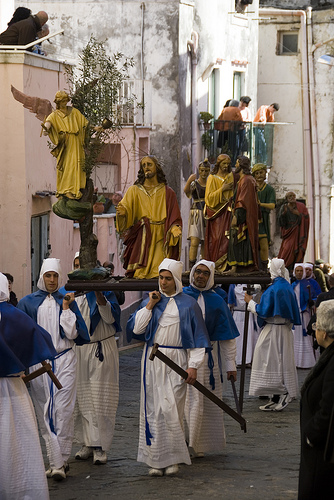