Venice by the Light of the Moon 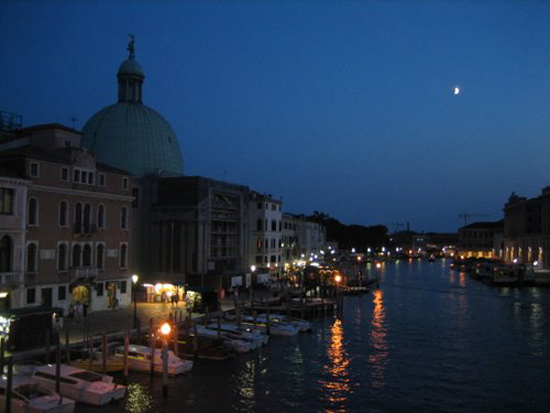 Venice by the Light of the Moon. Photo credit: panoramio.com


While stunningly beautiful and packed with enough cultural gems to last you a lifetime of exploration, Venice is not known for its off-the-hook nightlife. In fact, Serenissima, Venice’s Italian moniker means the “very serene one” and certain noise pollution laws which behest bars in most areas to close by midnight have seen to it that Venice has rightfully earned its nickname. There are a few exceptions, which are mentioned below, but in general, one should expect a lovely, but not terribly late night out on the town when in Venice. Here are your best bets for nightlife in Venice:

During the summer months, one of the most central and scenic after-dinner things to do is to have a drink in Piazza San Marco. The cocktails may set you back close to 20 euros each, but the major caffes that line the Square, such as Florian, Lavena and Quadri provide live music (usually jazz standards with a mix of more contemporary music) and the setting of San Marco is of course always breathtaking.  Harry’s Bar is just a few steps away from the Piazza and offers not only a historical setting but its historic drink: the Bellini (prosecco and white peach nectar). And, just a few minutes walk further in the direction of Accademia is the Hotel Bauer, which has a bar overlooking the start of the Grand Canal and a dance club open till at least 3 AM. 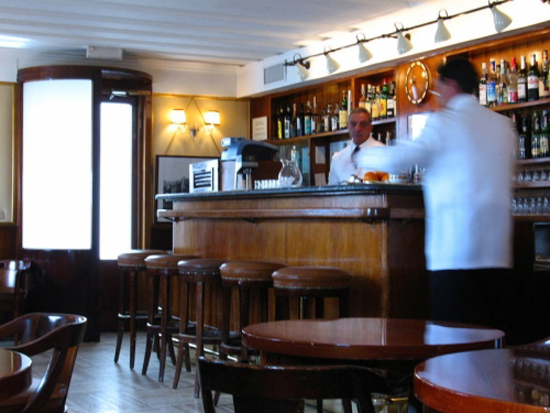 
Campo Santa Margherita in Dorsoduro is a lively campo lined with bars that is popular especially with Venice’s university students. Bareto Rosso is perhaps the hippest, with a permanent crowd outside to prove it…at least until midnight when the bars are forced to close. In the vicinity, just north of the Campo and to the right, you will find also Sotto Sopra (with karaoke daily—upon request—until 11 PM) and further along Café Noir (good beer selection). To the south of the Campo Santa Margherita and just a few meters down to the right before the bridge (Ponte dei Pugni) is the Venice Jazz Club that has live music every night until 11 PM (though mostly for tourists) and just over the little bridge is the Osteria Ai Pugni that have a curated wine selection in addition to the ubiquitous spritzes. If a dance club is what you are looking for, continue walking toward the Accademia and you will stumble upon one of the few in Venice: Piccolo Mondo, which remains open till 4 AM on Fridays and Saturdays (more frequently in the summer), though again, more for tourists. 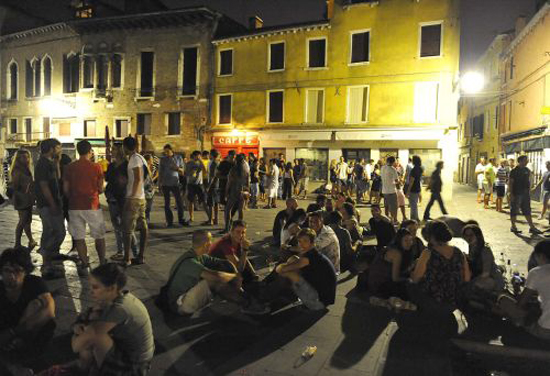 
On the Santa Croce side of the Rialto, you will find a strip of bars and restaurants that stay open late with lovely views of the Grand Canal (Note: Saturday evenings during colder months tend to be more of a high school crowd.) Across the Canal, you can catch a glimpse of Taverna del Campiello Remer, a good restaurant with live music nightly and a happy hour of sorts from 5-7 PM with a free buffet of light fare. To get there, cross the Rialto and head in the direction of the train station (on your way, you will pass Bacaro Jazz, a lively bar more for tourists open till about 2 AM that has a ceiling lined with dangling bras) and make a left before the watch store Full Spot, snaking your way to the Canal. 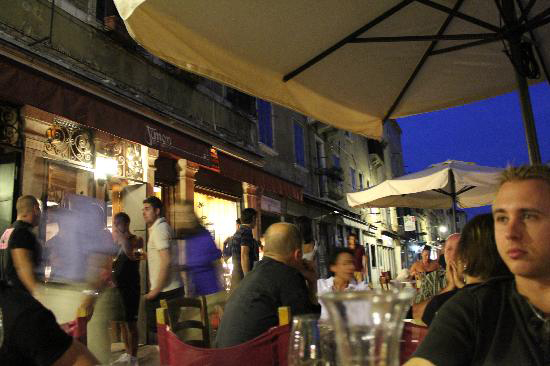 
In Cannaregio, Fondamenta Misericordia (which turns into Fondamenta Ormesini) is where the nightlife at. Paradiso Perduto, a great and relatively affordable seafood restaurant with a bohemian atmosphere and matching clientele, often has live concerts and a bustling bar scene typically open till about 1 AM on weekends and concert nights, if not much, much later. Further along the fondamenta, you will come across Da Aldo, a bar with a very good selection of beer from around the world, Al Timon, popular with the hip Venetians and tourists alike (great Italian wine and cechetti—Venetian tapas—dinners are fabulous here too) and Profondo Rosso, the closest thing to a dive bar Venice has and a great place to end the evening with a grappa or an amaro.

Would you love to suggest more?

CharmingItaly >
Blog >
Venice by the Light of the Moon