The ultimate guide to shopping in Rome

Where to shop in Rome during your stay! It is a common opinion, talking about shopping in Rome, that it is a catchy city suitable for all tastes and budget. In some respects it is, but it is also known that the city has changed dramatically due to the disappearance of historical shops, stores and boutiques that have been the datum point of manufacturing excellence of the capital city for decades.
A few examples: the boutique of the Fontana Sisters, the famous fashion designers who dressed the most important stars of the jet set of La Dolce Vita during the sixties; or Capucci Boutique whose creations are now collected in museums; but also  Fonderia Carnevali for the refined machining of cast iron; Serra that selled valuable gift items at Via del Corso; finally, the Treppiedi guepierre boutique for women. Lastly the Valentino's boutique located until recently in Via Bocca di Leone and now closed. These are just some names. With the disappearance of some of these important shopping’s datum points, the birth of other commercial entities that have radically changed the aspect of some places in Rome, concurred.
Among all the famous Via del Corso, where the exclusive boutiques of haute couture have given way to big brands such as  H&M, GAP, Adidas, ZARA, Body Shop.
Among the noise of colorful signs, survives Grilli, an ancient and refined shoe store. Indeed, one of the aspects of the charm of this city is also the coexistence of different eras and generations. That's how ancient typical brands survive at the modern shopping centers: CASTRONI, founded in 1932, is the emporium of excellence food products typical of Italy and the world.
GUANTI D'AURIA sells handmade gloves. It has been founded by an artisan of Neaples at the end of the 19th century and is located in Via Due Macelli not far from Via del Corso.
TEBRO is an ancient knitwear shop, founded in 1867. Finally, the Moriondo & Gariglio's confectionery at  Piazza del Collegio Romano. Just to name a few. 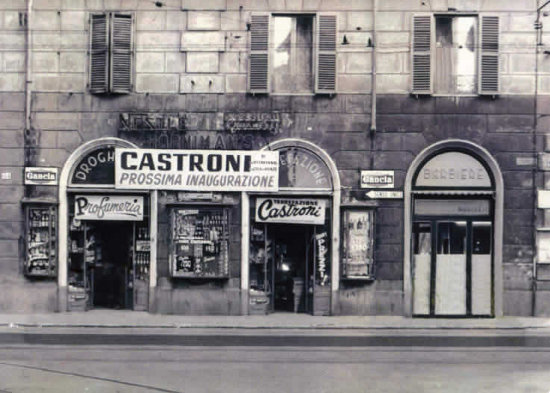 Also in this case, a division in areas of the city will help us to identify where to shop in Rome and our area of ??interest for our preferred shopping.
If you are looking for the big names of the italian fashion, Armani, Prada, Max Mara, Rocco Baracco, Versace, Dolce & Gabbana, you should head for the Spanish Steps and Via Veneto. Via Condotti and Via Borgognona are the real "queens" of fashion. Even Campo Marzio area, on the opposite side of the Corso, is a particularly popular destination among tourists. It's here that you can found Luis Vuitton, Bottega Veneta and the famous store of Davide Cenci, but also the two most famous ice cream shops in Rome: Ciampini and Giolitti. Just a while ago Giolitti had hosted the wife of President Obama, Michelle Obama and daughters, for a fun lesson on ice creams! Via del Corso is the true reference of trademarks such as GAP, ZARA, H&M. But Via del Corso is also the street where the oldest department store in Rome, La Rinascente, and the commercial gallery dedicated to the great actor Alberto Sordi, are located.
Instead, the refined Via del Babbuino is the ideal roman destination for those who are looking for works of art and antiques of value. Even the old paper mill FABRIANO is here. If you are looking for a less expensive but equally typical antique shops Via de' Coronari is your destination.

This is also an excellent place to visit the most typical goldsmith shops where you can find examples of "mosaico minuto". Other areas are particularly interesting: Via Margutta and Rione Monti. Since ancient times Via Margutta together with Via del Babbuino has been the district of artisans and restorers. Now  many important galleries of contemporary art have taken their place. Federico Fellini lived there for a long time.
If you go to Rione Monti don't miss the many vintage boutiques and contemporary design stores. Finally Via Governo Vecchio. An interesting street for emerging designers and for some of the most famous second-hand clothes shops of Rome!

CharmingItaly >
Blog >
The ultimate guide to shopping in Rome