What to do in Taormina 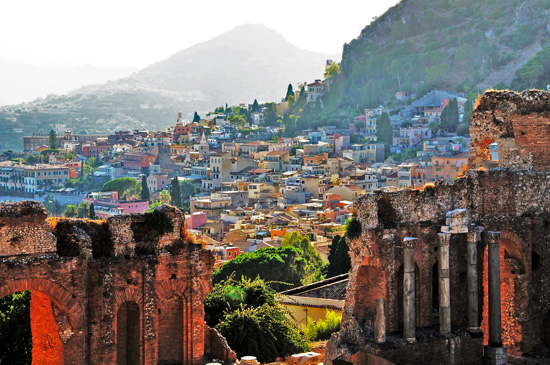 What to do in Taormina - Taormina from the Greek Theatre


One of the first things to do in Taormina is to orient yourself. The main street of the town, Corso Umberto, runs from north to south between two ancient city gates: Porta Messina and Porta Catania, named after their closest cities. Between these two gates Taormina is pedestrianised so you can wander to your heart's content without having to worry about being run over by anything larger than a fashionista. Note: although there's plenty to see and do along Corso Umberto, do make sure to explore the little side streets: you'll find treasures around every corner.


Just inside Porta Messina, in Piazza Santa Caterina, you'll find the church of the same name. Possibly more interesting, though, is what's behind and underneath it. Uncovered by accident by a blacksmith in 1892, the Roman Odeon is on a much smaller scale than the main theatre, but has the same basic layout. 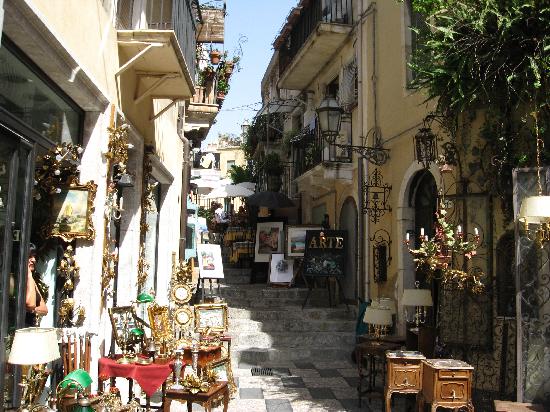 What to do in Taormina - Antique Shops

Go back to Corso Umberto and swim through the throngs of people checking out all the shops selling antiques, designer clothes and traditional Caltagirone pottery. Just when you think the crowds can't get any denser and there can't possibly be any more to see, Corso Umberto will magically open out into Piazza IX Aprile, giving you a beautiful view over Naxos bay towards Etna. Take a seat in the historic Wunderbar, frequented by glitterati through the ages, and drink in the scenery along with a cocktail. Don't forget, either, to enjoy the baroque beauty of the Chiesa di San Giuseppe and, in contrast, the church of St Augustine (now the town library)'s gothic sternness. 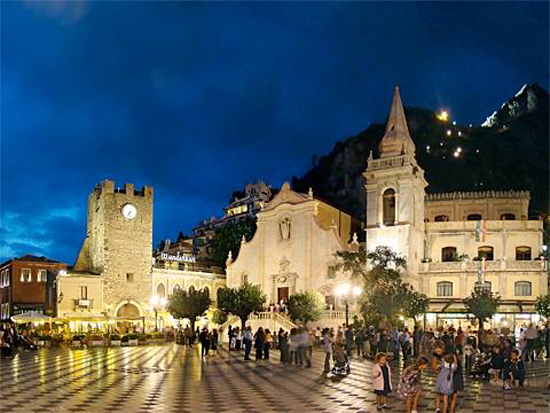 What to do in Taormina - Piazza IX Aprile

When you've finished your cocktail, continue on underneath the clock tower into the oldest part of Taormina. Here Corso Umberto narrows and the shops become smaller. When you are almost at Porta Catania the street opens out again into Piazza Duomo. Go inside the cathedral and see the famous Byzantine Madonna, who, the story goes, was left in a well by the angels, then take a closer look at the fountain in the square. The centrepiece is a centaur with a difference: first, she's female, and second, she has feet instead of hooves.

At some point you'll be in need of some sustenance. Luckily, Taormina has numerous bars, cafes and restaurants to choose from, with something to suit all tastes and budgets. In particular, make sure to try at least one granita at Bam Bar. It's table service only, and you may have to queue at busy times, but it's worth the wait! 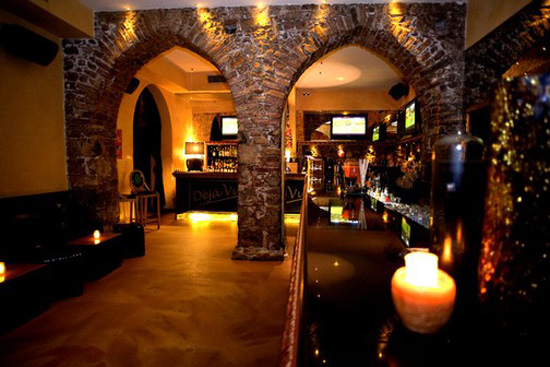 What to do in Taormina - Bar Deja Vu


If you're feeling adventurous, head up to Castelmola, 2km into the hills above Taormina and go to Turrisi Bar. It's themed around the penis (or 'la minchia' as the Sicilians call it), and is a fascinating place stuffed with sculptures and artwork, which serves good food and cocktails.


Taormina may be a mountain town, but it has its fair share of beaches close by as well. For fine sand and reasonably-priced lidos head to Giardini Naxos. Alternatively, take the cable car to either Isola Bella or Mazzarò. Both are rocky and well-equipped, and from there it's easy to pick up a boat trip around the bay.


Top tip: for a quieter beach, head to Mazzeò, further up the coast towards Letoianni, which has small pebbles and none of the crowds.
If you are a sea-lover, take a look to this infographic about the best beaches in Sicily!

CharmingItaly >
Blog >
What to do in Taormina