The Italian Flag: history and meaning of Il Tricolore Italiano

Which is the history of the three vertical stripes of the Italian flag? 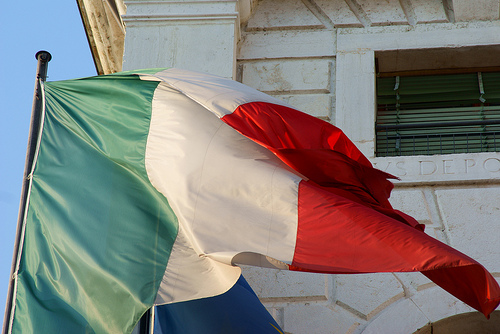 
In 1794, two students from the University of Bologna attempted an uprising against the local power, which ruled the city since almost 200 years.

They chose the colours of the city of Bologna, red and white, and added the green which symbolizes the hope. The decision of the tricolour was also in the honour of the French flag (which has blue instead of green), that had become the symbol of freedom, equality and fraternity after the Revolution.

The three colours have soon become the symbol of the Risorgimento(The Resurgence), the important historic period when Italy became a Nation, in 1851; the red also symbolized the blood of the fallen.

In 2011, Italy celebrates its 150 years and many celebrations are organized throughout the peninsula.

How many of you know the origin of their national flag?

Discover our tips and curiosities about Italy with our Thursdays section"Slices of Italy"!