Located in the historic center of Salerno is one of the most beautiful and important churches of southern Italy. Discover the medieval heritage of Campania at the Cathedral of San Matteo in Salerno. 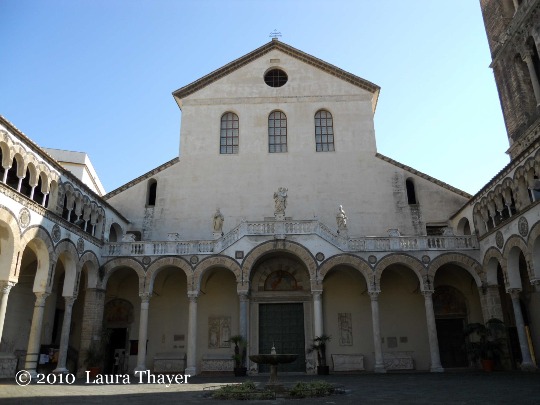 Many of the art and architectural treasures of Italy are found inside beautiful churches, such as the Cathedral of San Matteo in Salerno. Located just a short drive from Naples and the Amalfi Coast, Salerno is a wonderful day trip destination in Campania.

The beautiful 12th-century brick bell tower of the Cathedral of San Matteo (St. Matthew) rises above the medieval center of this city stretching out along the Bay of Salerno in southern Italy. It draws visitors to the historic heart of the city to discover one of the most important churches in the region of Campania. Founded in 1076, the Duomo, as it is called in Salerno, features a unique atrium surrounded on four sides with a portico. A grand Romanesque entrance, called the Porta dei Leoni (Door of the Lions) after the two marble lion statues flanking the doorway, leads into the peaceful atrium. Here you can stroll around the courtyard absorbing the splendor of medieval Salerno. 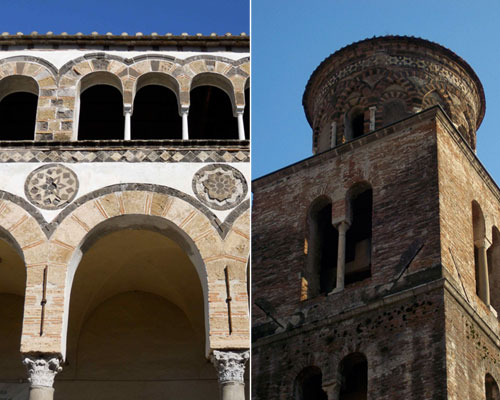 The Romanesque bell tower is an impressive 56m (184 feet) tall and soars above the atrium of the church. It was constructed in the middle of the 12th century out of travertine, bricks and elegant columns that likely came from the ruins of ancient Paestum nearby. The bell tower is topped by a short cupola decorated with interlacing arches and intricate floral designs created with different colored stones. The portico surrounding the atrium also features elaborate geometric designs in the arches supported by 28 ancient columns from ancient sites in Salerno. The feeling is warm and reminiscent of the Byzantine and Arab style found in the Romanesque architecture of Sicily. 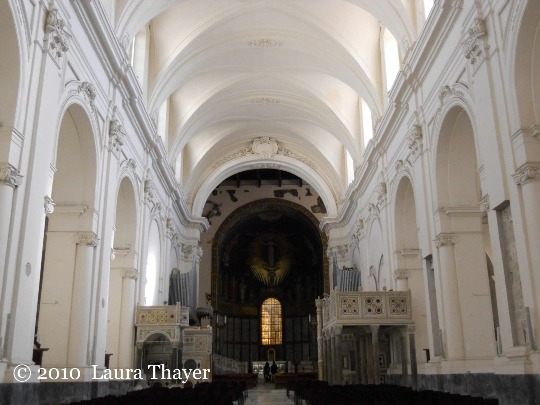 Inside, the central nave soars above, decorated in a sober, white Baroque design from the 18th century. Walk along the nave and look for where the Baroque decorations have been removed to uncover the beautiful and massive columns beneath. This work has been carefully done in many places of the church to reveal the Duomo’s medieval decorations. Two important ambones from the 12th century are located at the front of the central nave. In the Middle Ages these elevated platforms were where the liturgy was ready during important celebrations. The intricate Arab-Sicilian style mosaic work on the ambones and the large paschal candlestick is found throughout Campania, notably in the Cathedral of Sant’ Andrea in Amalfi, Cathedral of San Pantaleone in Ravello and the Duomo of San Lorenzo in Scala on the Amalfi Coast.

The east end of the church is the most splendid and features a grand central apse flanked by two smaller apses. All three are decorated with 12th century mosaics in vivid hues of blue, red and gold. Much of the mosaics on the walls were damaged centuries ago during earthquakes, but what remains is a glimpse of the how glorious the Duomo of Salerno was in the Middle Ages. The right apse contains the tomb of Pope Gregory VII who died while in exile in Salerno in 1085. 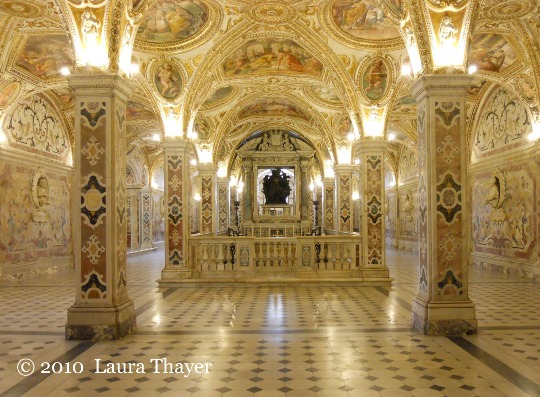 Look for a little door in the north aisle near the front of the church for a little doorway that leads down to the crypt of San Matteo (St. Matthew). A gleaming display of Baroque design, this is one of the religious and architectural treasures of southern Italy. The relics of the Apostle San Matteo were brought to Salerno in 954, but this impressive crypt dates from the first half of the 17th century when the Kings of Spain, Filippo II and Filippo III, chose to demonstrate their dedication to San Matteo by redecorating the crypt in a lavish Baroque style featuring inlaid marble, frescoes and a bronze statue of San Matteo by Michelangelo Naccarino, the artist who designed the statue of Sant’ Andrea in the Duomo of Amalfi.


Offering a glimpse into Salerno’s past, the Cathedral of San Matteo is one of the many reasons to head south and discover southern Italy’s Campania region.