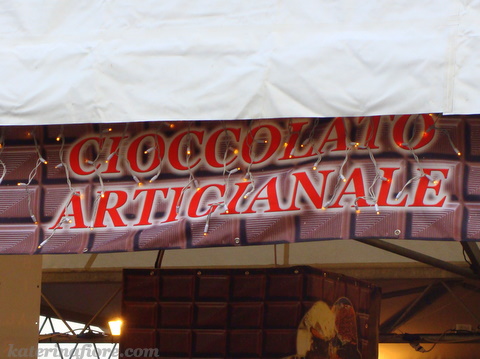 Being Valentine’s day just around the corner, the Fiera del Cioccolato is happening in Piazza Santa Croce. This past Sunday, it opened and I had the pleasure of visiting it. I should have known how crowded it would be. I walked into Piazza Santa Croce with the scent of chocolate. Every type. There were crowds of people and little children dressed up for Carnevale. There was no way I was going to make it around the festival walls. It seemed as if people had never seen so much chocolate in Florence before. I couldn’t make it through the main aisle down the middle of the festival because it looked like this. 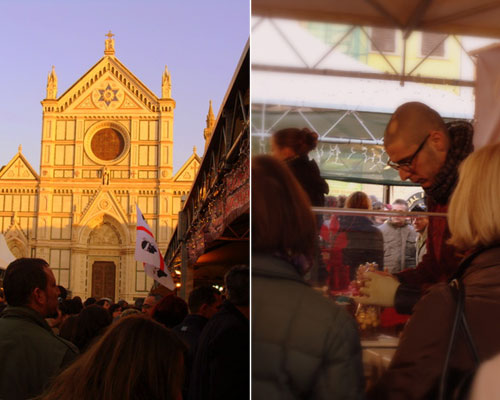 The chocolate was presented in all different ways. On a stick, in a cup, with candy. I witnessed some with hot hot chocolate in their plastic cups, it looked delicious. Even the kiosks of chocolate vendors were bombarded with what seemed like the whole city of Florence at once. I was only able to snap a few shots of people being served. People were really pushy throughout. 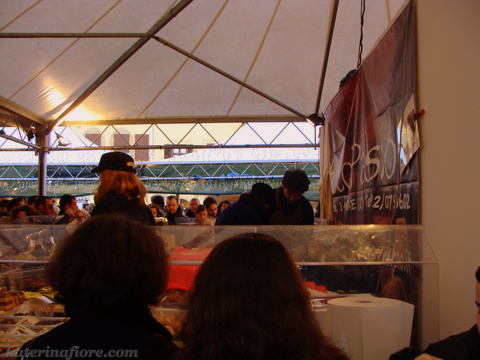 Carnevale season has begun thus there were many (mostly children) people dressed up. I saw little princesses running about with wands. Some had their faces painted and others had extravagant costumes. Puppy dogs and kitty cats throwing confetti at their parents and friends. I also caught a glimpse of Buzz Lightyear and Woody from Toy Story, they kindly posed for a picture for me.  It was a joyous occasion where families congregated in the chocolate piazza of Santa Croce. 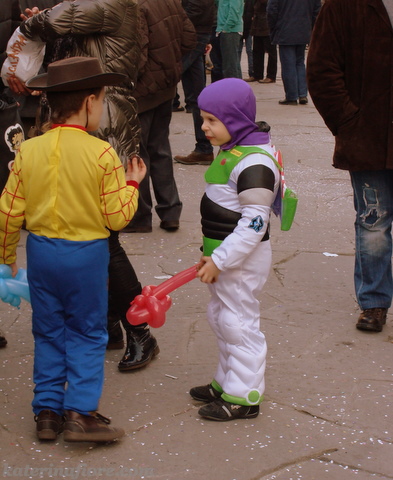 The chocolate came from all different parts of Italy. From Torino to Genova to Austria as well. The prepared the chocolate in very original ways. I found one vendor that had chocolate and tartufo (truffle) together. My mouth was watering. Love love tartufo! :)

Wishing I had a piece of chocolate as I am writing this, I hope to try some chocolate this weekend since usually during the last few days the crowds tend to slow down. But I am not sure because chocolate is popular, every day of the week and until the bitter end of the supply of chocolate is gone. I can always hope I will get a taste. :)