The night of Taranta 2014 - Summer in Salento, Puglia

"La Notte della Taranta" is one of Italy's biggest folk music festivals and one of Europe's most important events dedicated to traditional culture. 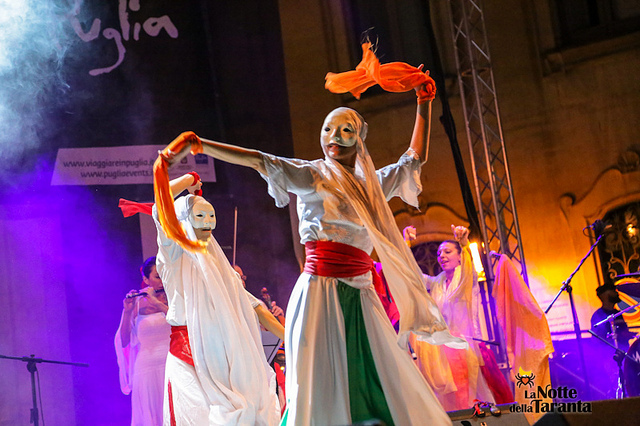 Summer in Salento - The night of Taranta 2014

After the huge success of the previous editions, the 2014 edition of The night of Taranta will take place in and around the striking landscape of Salento from August 5 to 23.

As underlined on our previous post about the captivating Apulian folk dance, this Italian music festival aims at promoting and valorizing the Salento's folk music and its fusion with other types of music – from world music to rock, from jazz to classical music.

The night of Taranta is a traveling festival  and every concert will have a different location: Grecìa Salentina, Alessano, Cursi, Galatina and Lecce. The Festival’s grand finale helds in Melpignano and will be attended by more than one hundred thousand fans from all over the world, for a night dedicated to music and dance.
“La notte della Taranta” is able not only to engage and captivate locals and travelers with dance and music, but it is also a great chance to discover Salento and spend a holiday in Puglia under the rhythm of music.

For further information, it is best to check the news on http://www.nottedellataranta.it/ or contact the local tourism offices.

CharmingItaly >
Blog >
The night of Taranta 2014 - Summer in Salento, Puglia