The Feast of Saint Nicholas


Did you know that Santa Claus lives in Puglia? In the regional capital, Bari, to be exact. So much for all you have been told about the North Pole and reindeer. If you ask anyone from this part of the world, they'll be sure to set you straight. Saint Nicholas, the original Father Christmas, calls the San Nicola Cathedral in the heart of Bari's old town, on the edge of the Adriatic Sea, his home.


The original Saint Nicholas was born in Turkey in around 280 A.D. He became an orphan after his parents died in a plague, but was well-to-do thanks to a sizable inheritance. According to legend, as a young man Nicholas heard of the plight of a poor father who had three daughters, but not enough money for a dowry for any of them and was considering selling them into prostitution. Over the next two nights, Nicholas threw a bag of gold into their window, one of which apparently landed in one of the girls' stockings, which were hung up to dry. On the third night the girl’s father lay in wait for the generous mysterious donor and as Nicholas threw the third bag of gold into the window, the father ran after him and was able to thank him. This act of kindness started the tradition of giving gifts and the legend of Santa Claus.


Nicholas went on to become the Bishop of Myra, in Turkey. After his death, the saint's reputation for miracle-making grew. Many of the stories told about him described miracles such as the replenishment of wheat during a famine and even raising people from the dead. Here's where Bari comes into the picture: the city had fallen on hard times and local merchants persuaded some sailors to steal St. Nicholas' bones, which could then be housed in a special church. Pilgrims would be attracted to the area, thus generating revenue for the citizens of Bari.


In 1087 Italian sailors sailed across the Mediterranean Sea and landed in Myra where they smashed the top of St. Nicholas' marble tomb and pilfered his bones. Back in Bari, the merchants built a special church, in 1089, to house the saint’s relics and the names of the sailors who helped in the theft were engraved on the outside wall. Pope Urban II came to Bari to lay the bones in the crypt of the church. 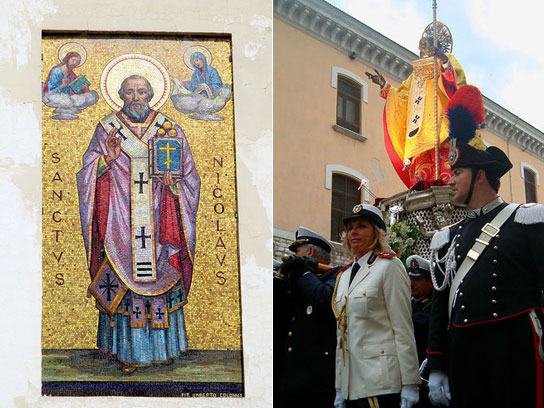 
A great religious folk festival is held every year in Bari, to commemorate the rather unethical arrival of St. Nicholas' bones on May 9, 1087. Many thousands of people from all over the world come for the festivities which begin on the morning of May 7th. Priests go on a boat with a painting of St. Nicholas to spend the day at sea. The public square and other areas are turned into a festive fairyland lit by large beautiful lacy screens of lights. 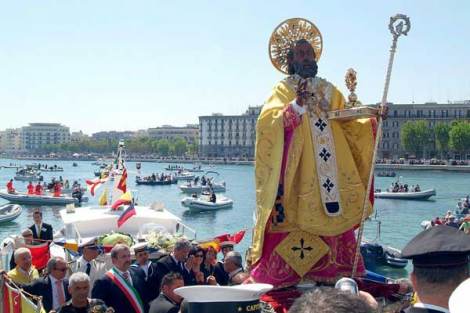 
When the painting returns, a great procession of people in 11th century costume follow it from the port of San Giorgio, winding along the roads to the square in front of the Basilica di San Nicola. With floats and dramatic enactment, the parade effectively re-tells St. Nicholas' story.


The next morning, on the 8th, crowds gather at the breakwater for a large outdoor Eucharist celebrated by the Archbishop of Bari. A larger-than-life colorful St. Nicholas statue from the basilica is carried in a procession and set next to the altar for the two-hour service. After the mass the statue embarks on a day-long sea voyage. A whole flotilla with dozens of boats forms a festive escort. In the evening the harbor is lined with thousands of people waiting to greet the statue's return. Twelve costumed men carry the impressive figure on their shoulders, accompanied by bearers with flower poles and torches. 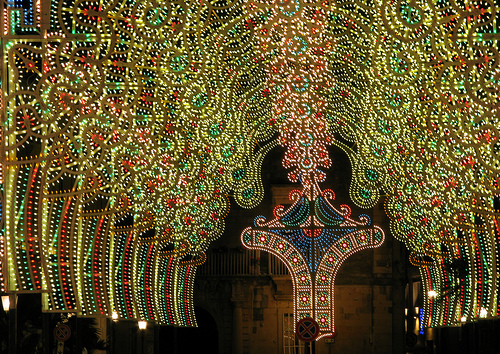 
The celebration continues the evening of May 9th. The basilica is filled-to-overflowing for another mass, again celebrated by the Archbishop of Bari. Ecumenical guests, particularly Russian Orthodox, and pilgrims from around the world are present. As the Eucharist concludes, the altar party, choir, and invited guests seated in the front rows, go down to the crypt which holds St. Nicholas' tomb and bones. The choir chants as the rector crawls into an opening at the front of the tomb and brings out the manna, a liquid which has always accumulated around the relics. 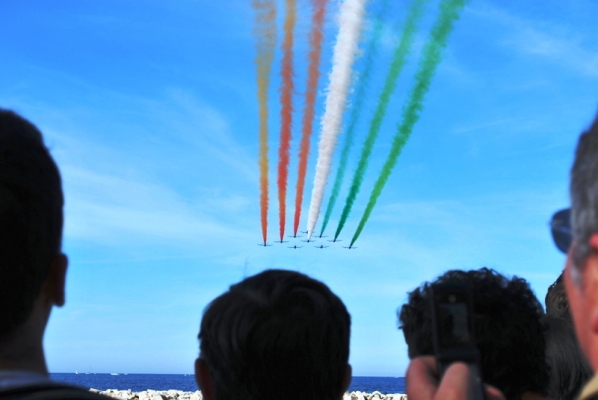 
Outside the celebration continues with displays of the Frecce Tricolore Italian Air Force acrobatic team, fireworks and merrymaking on into the night. 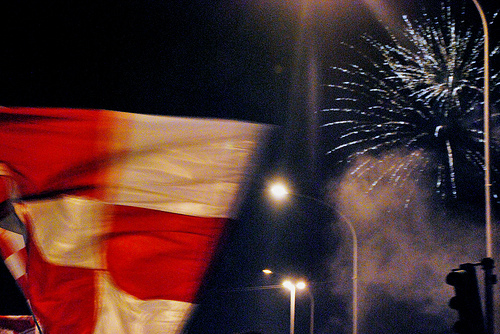