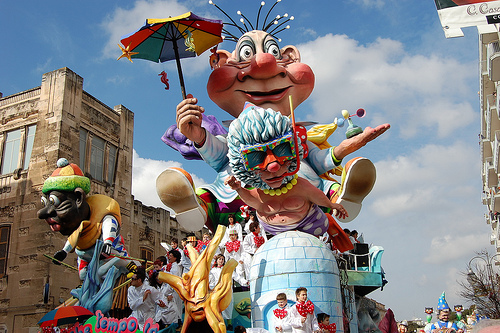 An annual event for the past 617 years

In Puglia Carnival is not a single day or event, but a whole season of masquerades and fun for people of all ages. Every Sunday children run through the town squares wearing costumes representing their favorite cartoon characters or heroes and tossing coriandoli, hundreds of tiny pieces of colored paper, at passersby. Costume balls and parties are held for adults to dress up and let their hair down.

Every town organizes events and parades to celebrate this period of gaiety before the arrival of Lent, the Catholic period of prayer and penitence. However, the Putignano Carnival is arguably the most famous, and certainly one of the oldest carnival celebrations in Europe. 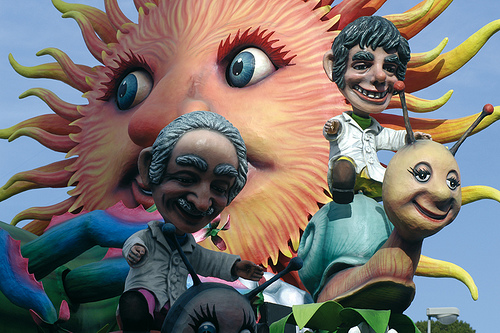 Although its origins are lost in the mists of time, tradition has it that the festival began in 1394. That year, the Knights of Malta (who governed the area at the time) decided to transfer the relics of Saint Stephen from Monopoli, located on the coast of the Adriatic Sea, inland to Putignano in an attempt to protect them from invading Saracens. Upon the arrival of the procession carrying the relics, the farmers abandoned their fields of grapevines and tagged along behind. After the religious ceremony, the country folk began to sing and dance and to recite Propaggini, satirical poems which poke fun at authority figures, recited in the local dialect. 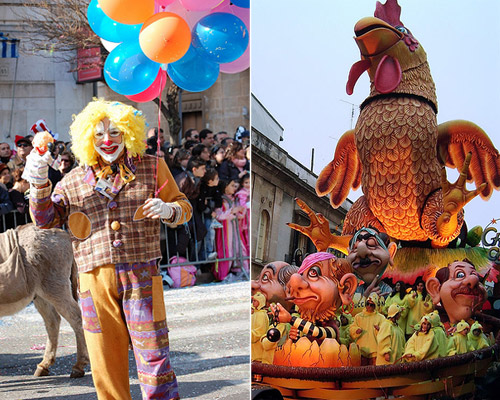 It was only during the Fascist era that this rural carnival developed into the more refined, suburban event of today. This was when the parade, a favorite form of communication in Fascist culture, of floats came into fashion. The first floats are said to have been made with straw and rags, then cardboard and wood, until the current system of papier mache over wire structures was developed. The floats always have themes related to scathing political satire or current affairs and feature giant caricatures of politicians or TV personalities. They are accompanied by troupes of costumed dancers and loud music to engage the crowds of spectators. 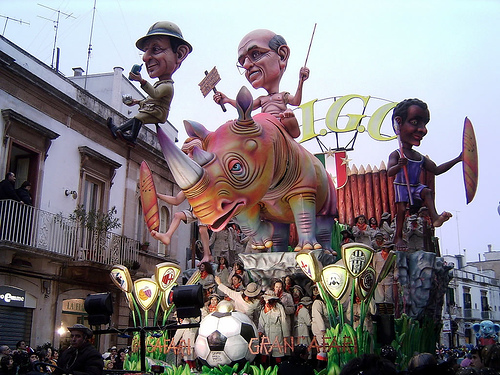 Every carnival has a character that symbolizes the festival and Putignano's is Farinella. Farinella is a jester dressed in a multi-coloured suit and a hat with two points with bells at the tips. His name comes from a typical local dish, made with barley and garbanzo beans. 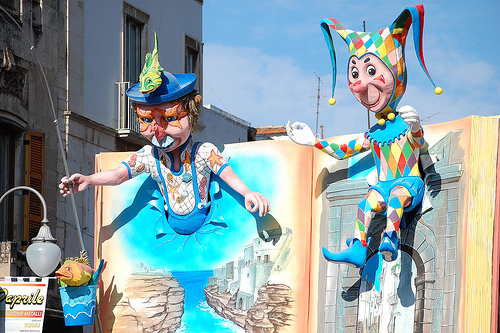 Putignano's carneval is one of the longest. It begins on December 26 with a religious ceremony in which the townspeople take a candle to church and ask forgiveness beforehand for the sins that they will commit during the carneval period. That same evening the Propaggini festival is held. In keeping with the tradition of the first carneval, actors dressed as farmers and carrying farm tools recite satirical verses in the local dialect about important events that have happened during the previous year and gossip about local politicians.

Other events are held throughout the carneval season. Every Thursday is dedicated to mocking a different group of people. The first to be made fun of are the monsignors, then, in the following order: priests, nuns, widowers, bachelors, married women and cuckolds. The Bear Festival is held on February 2. The tradition is that if the weather is good, the bear (a costumed actor) builds a haystack to protect himself from the coming bad weather; instead, if the weather is inclement, the bear can relax because the weather will be good from then on. The carneval ends on the evening of Fat Tuesday, with a funeral procession in which the Carneval is represented by a pig.